Internet throughout childhood to teenage years

(I'm a Finn so this is mostly for my finnish followers) 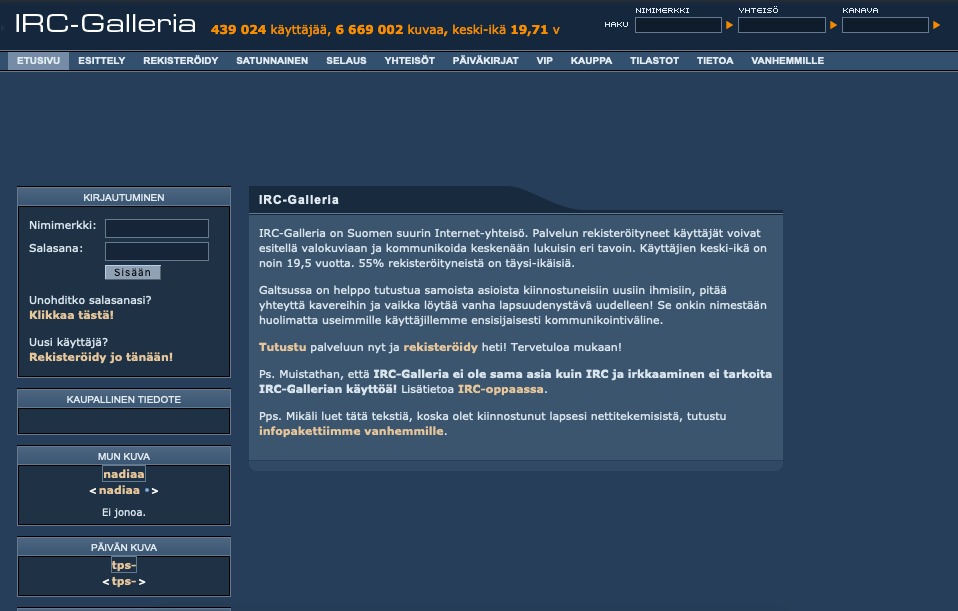 Well, it was founded 2000 but was important so heck the 90s. IRC gallery was a first social networking website. Basically you added photos (taken with potatoes) and ALL the conversations was done publicly under those pics. So, if you had a crush on someone everybody know that at some point.

There was also groups (hobbies, music, cities etc), the stranger the better. Diaries were full of quizzes and random life rants.

Check out this blog for example.

Internet was boring, slow (56k modem), wondrous and peaceful. You really had to dig up the information with bunch of sites or on many cases create your own page. Search engines before Google were www.fi and Altavista (like Bing but even worse).

Communication via people was simple. It was easier to find interesting communities and chat buddies. 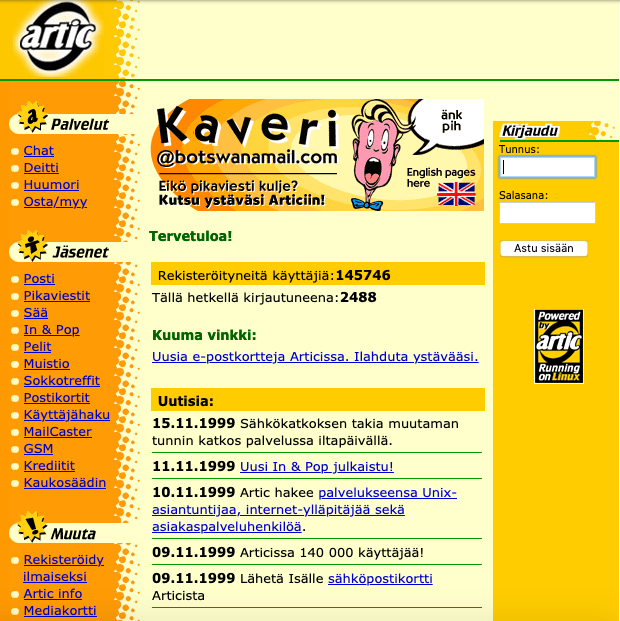 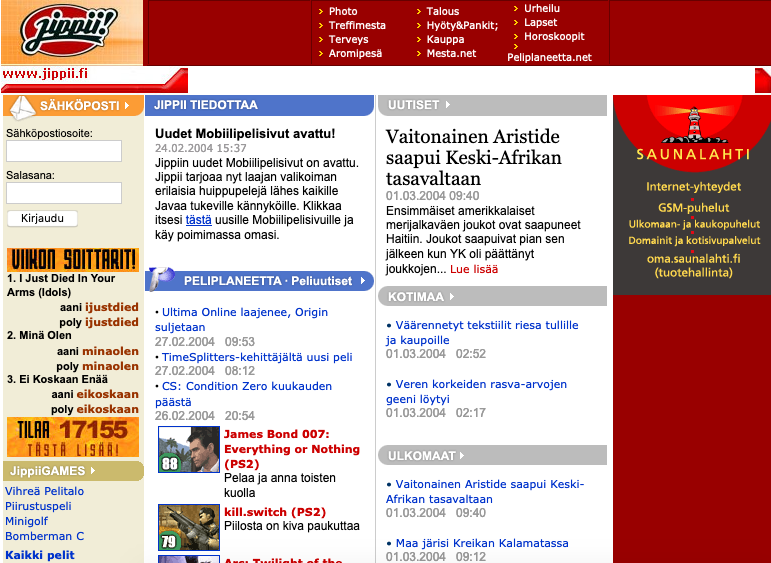 I had several emails for different occasions. I send mail to my penpals on artic.net buffy_15(at)jippii.fi was my first official email. High five if you watched Buffy. On mbnet.fi I had my first webpage and yet again, another email address which I didn't use. 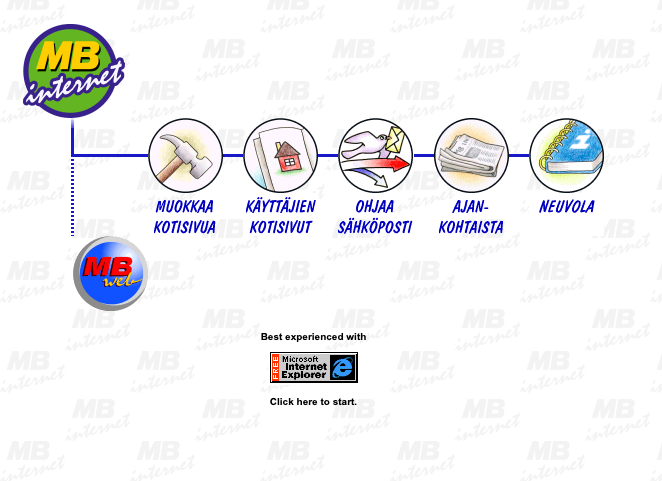 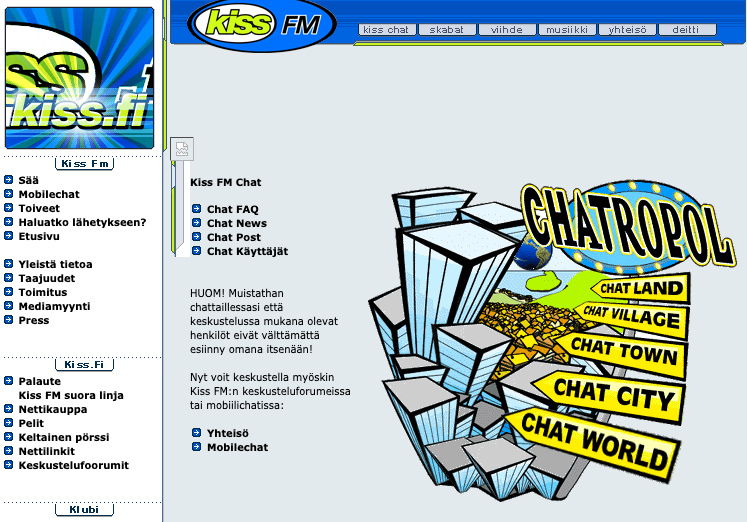 At the library me and my friend spend time on KissFM chat. There were 'rooms' where you could chat with strangers and all the conversations started the same girl/boy, age? We always faked to be teenagers and came up with bra sizes. Conversations broke of and we lost our chances to talk ever again. That's if you did not have time to request contact information. Later, we got banned couple of times, apparently some topics were not tolerated.

When the internet began to become more widespread I reserved an hour slot in the library for a machine that could access the internet. I pedaled full on the bike and went to mtv3.fi to play some platform dog game for an hour. At the same time, library aunts were heated because the reservation could not, in principle, be used for entertainment but for information retrieval.

Every video on the internet was married to RealPlayer. I remember watching something on NBC page and it was buffering like 6 minutes straight. I never was very patient with waiting and it was pleasant to get rid of that RealPlayer bastard.

One thing that has certainly been forgotten by many over the years, namely people's own websites. Producers of various content, entertainment were on their own websites. There was no Youtube to put everyone together.

Because search engines were bullshit, finding good websites was in part such a “sages know” level job. Because of this, the sites of the various hobby districts also had these "link links", i.e. they even linked back and forth so that users could find their destination if they happened to get lost on even one of the pages of the link network.

It's in itself exciting I don't feel like it's been a long time before it was quite sensible and obvious to make a website on a certain topic if there was something to give. The internet where anyone - without any kind of competence - can be a content producer and where everyone has the opportunity to express their opinion right now, in real time and the world can hear it.

Back then, you could also be a content producer if there was a little computer hobby in the background. Someone more knowledgeable about aquarium care might still be in the yard than a snowman, but it didn’t really lead to somehow storms or downright death threats as of today if someone suggests the wrong diets. Many probably didn't even bother to put in angry email, but to save dial-up time, they thought but in their own peace that "this is a pretty shitty page" and put it on.

Come over to the dark side, we have cookies

Before there was more privacy on the Internet, that was for sure. Today, every push of a button and mouse movement goes somewhere in a huge data bank. In the 90s, there was no question on every page that do you want to accept cookies.

Internet phenomenom in the nutshell

Chats and forums were social media at the time. No Instagram, Facebook or blogs. Those who wanted to bring out more had to make the home page, and the main content of the computer courses was to make those monsters with their oversized fonts and rotating symbols. The look was almost always white text on a black background or shit stroke of joy.

What I miss most is how the internet was still detached from the real world, nowadays it’s a weird jump if you don’t use something. In general, in the irc gallery, myspace, etc., the proto-some had a more authentic mood, everyone was their own, and even the most horrible cases could easily find a company like them. Nowadays, there have to be polished social media profiles or you're nothing.

It's a somewhat worrying phenomenon of how the web expands, but at the same time it shrinks. Sometimes in the 90's, search engines still found something like the homepages of quite random people. Nowadays SEO as a leading marketing strategy ensures that all organic content on the internet below a certain threshold disappears into the bit space and can only be found there with direct links.

Any other kind of magic was associated with that era and it's hard to describe in words when a big part of it is filtered through nostalgia filters. The reality wasn't necessarily as rosy as how I remember it. Past time seems to always be better than the current one, but I still objectively think that the internet was a fucking little cooler then.

In retrospect, the development of the Internet has been remarkably fast. Where are we going in 10 years?


©Text is entirely my own, pictures from Wayback Machine.